When developing Eclipse-based software consisting of a large set of plug-ins it is a good idea to keep track of the dependencies between the individual plug-ins.
There is an Eclipse Incubation project that makes it possible to visualize the directly and indirectly referenced plug-ins of a selected plug-in:
PDE Incubator Dependency Visualization

When I gave the plug-in a try I missed two things:
Basically, I wanted to show the complete dependency graph of all my plug-ins. The simplest solution I could think of was to
So I checked out the source code and tweaked it a little. Now it is possible to show the whole dependency graph for all my plug-ins by selecting a plug-in which is directly or indirectly referenced by all other plug-ins. 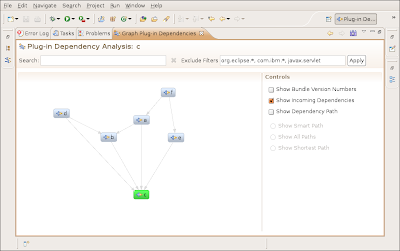 You can download a binary version of the modified plug-in here.

To get started, hit CTRL-3, type Graph and select the Graph Plug-in Dependencies View. To show the dependencies of a plug-in right-klick on the view and select Focus On...

Please observe my most recent post on this topic.