In theory, a Test Driven Development cycle constists of the following steps:
In literature the time for one TDD cycle is stated to be about a couple of minutes.

I was wondering how my personal cycle time is at an average. So I wrote a little plug-in for Eclipse that listens to test runs and computes the average time between a test run with failures and a test run without any failures.

Here is what the very simple plug-in looks like: 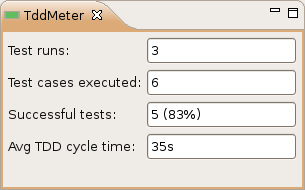 In case you want to give it a try you can download it here.
The plug-in contributes a view called TddMeter. In order to show it simply hit <CTRL>-<3> and type TddMeter.

Posted by testdrivenguy at 9:06 PM

really a nice plugin. Would be cool if the plugin persists its state so it does not get lost when I restart eclipse...

Thanks for your feedback. The plug-in now persists its state.

i've been running it for a while, my current stats are: